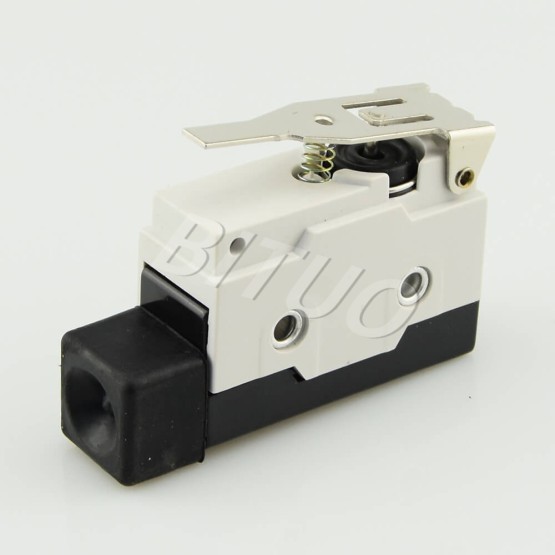 A Limit Micro Switch, is an electric switch that is actuated by very little physical force, through the use of a tipping-point mechanism, sometimes called an “over-center” mechanism.

Switching happens reliably at specific and repeatable positions of the actuator, which is not necessarily true of other mechanisms. They are very common due to their low cost but high durability, greater than 1 million cycles and up to 10 million cycles for heavy duty models. This durability is a natural consequence of the design.

The defining feature of micro switches is that a relatively small movement at the actuator button produces a relatively large movement at the electrical contacts, which occurs at high speed (regardless of the speed of actuation). Most successful designs also exhibit hysteresis, meaning that a small reversal of the actuator is insufficient to reverse the contacts; there must be a significant movement in the opposite direction. Both of these characteristics help to achieve a clean and reliable interruption to the switched circuit.

Micro Switches are used for many different applications within building, automation and security. Some examples of these applications are: Push buttons for alarms and call points; Triggers to prevent devices from being dismounted; Turning devices for surveillance cameras; HVAC applications; Elevator applications; Access Control; Timer Controls.

BITUO manufacture all range of Micro Switch, which can meet all your requirements! Contact BITUO for Limit Micro Switch today!

D4MC-1020 is Burgess Limit Switch. This switch offering variety of functions including 15A current and different levers, widely using in industrial equipment.

All advantages of the Micro Switch can’t be described in a few words, but they are more and more popular all over the world. Furthermore, We provide our product based on the factory price. Please contact us freely for your best quote now!

MS10-Z2P is Micro Switch Amazon. This switch offering variety of functions in...