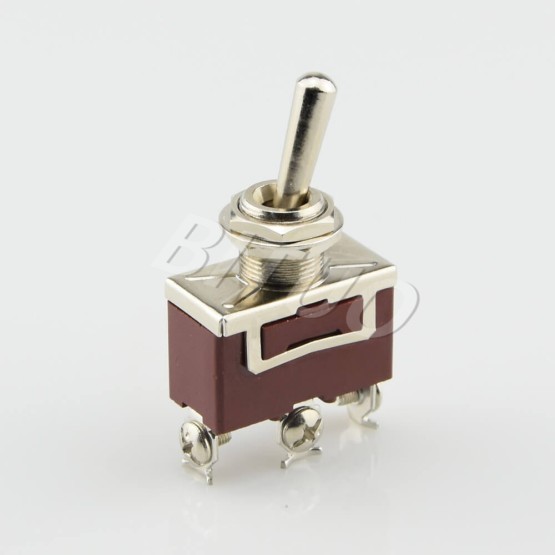 Generally, the Air Toggle Switch is composed of a metal shell, a metal switch plate and a bracket. The glass fiber plate is used as the insulating base, and two rows of fixed contacts are connected on the switch plate; the plastic bracket is provided with a small slot, in which the occlusive sliding spring is fixed (the soul of the toggle switch). The plastic spring bracket and the switch plate are fixed together by the shell.

Thespring loaded toggle switch is directly welded on the electronic circuit board, which has the advantages of small size, short lead wire connection and low price. It is also because of structural reasons that the number of bits and knives can not be too much. The voltage and current of the switch can not be too high in the circuit. Therefore, the rated load of the toggle switch is generally low and the working current should be low.

Spring Loaded Toggle Switch are available in many different styles and sizes, and are used in numerous applications. Many are designed to provide the simultaneous actuation of multiple sets of electrical contacts, or the control of large amounts of electric current or mains voltages.

MLTS-112 MLTS-113 MLTS-123 is Spring Loaded Toggle Switch. This switch with 3 terminals and uses an operability handle that offering ON-(ON) or ON-OFF-(ON) or (ON)-OFF-(ON)  function. It is widely using for industrial equipment. Besides, it uses screw terminals for quick and easy installation.