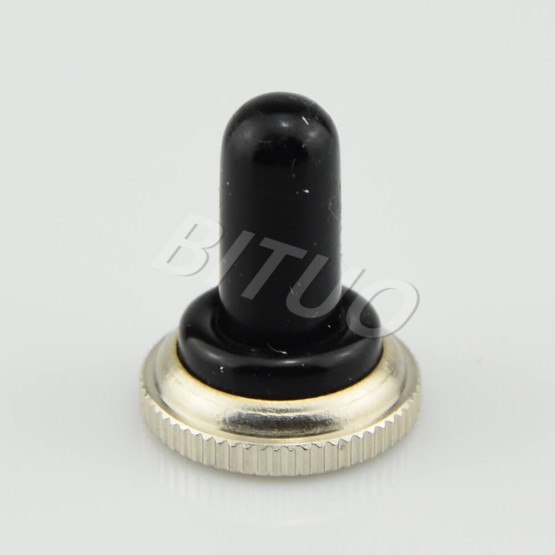 WPC-12 is Toggle Switch Safety Cap. The cover is made of rubber with a metal base. This cover is used on toggle switches for safety protection to prevent accidental firing and to keep dust away. It can be installed with many different toggle switches that match the 12mm.

100% brand new. The base Toggle Switch Safety Cap is steel. The other portion is Rubber. It has a metal pin for a pivot. Rubber body with black steel mounting Safety cover for the toggle switch. The cover should be opened once using the toggle switch. When the cover is closed, the toggle switch will return to its original position. Toggle switch satety caps are a type of cap that protects the tip of a lever of a toggle switch. A toggle switch is an electric switch operated by means of a projecting lever that is moved up and down.

What does a toggle switch do?

A toggle switch is a class of electrical switch operated by hand with a mechanical lever, handle, or rocking mechanism. A toggle switch is typically any type of switch with a handle that allows a circuit to be energized and de-energized. The devices include everything from very large switches, often provided with two toggles joined by a linking bar, to very small switches, many of which can be found on a single switchboard.

What does a toggle switch cover do?

All advantages of Toggle Switches can’t be described in a few words, but they are more and more popular all over the world. Furthermore, We provide our product based on the factory price. Please contact us freely for your best quote now!